Stonehenge today is called the ancient structure, which is a complex of stone blocks, bounded by an earthen moat. On the edges of the moat are two earthen shafts – internal and external. The latter, in fact, is the boundary of this whole complex. This man-made creation is located 130 kilometers south-west of London. The territory belongs to the administrative entity (unitary unit) of Wiltshire.

From Stonehenge departs the so-called avenue – it is a parallel to the river Avon parallel pair of ditches. The ditches, on both sides, are bounded by ramparts and have a length of about 3 kilometers. All this is barely discernible on the ground, but apparently once looked large and majestic.

The stone structures of the complex (megaliths or triliths), as well as individual rough-processed stones (menhirs) are grayish gray sandstone. At the same time, some of the smaller stones differ in color. They have a bluish shade, and they are nothing more than a siliceous sandstone. The latter is harder than calcareous sandstone and has a more pleasant aesthetic appearance. 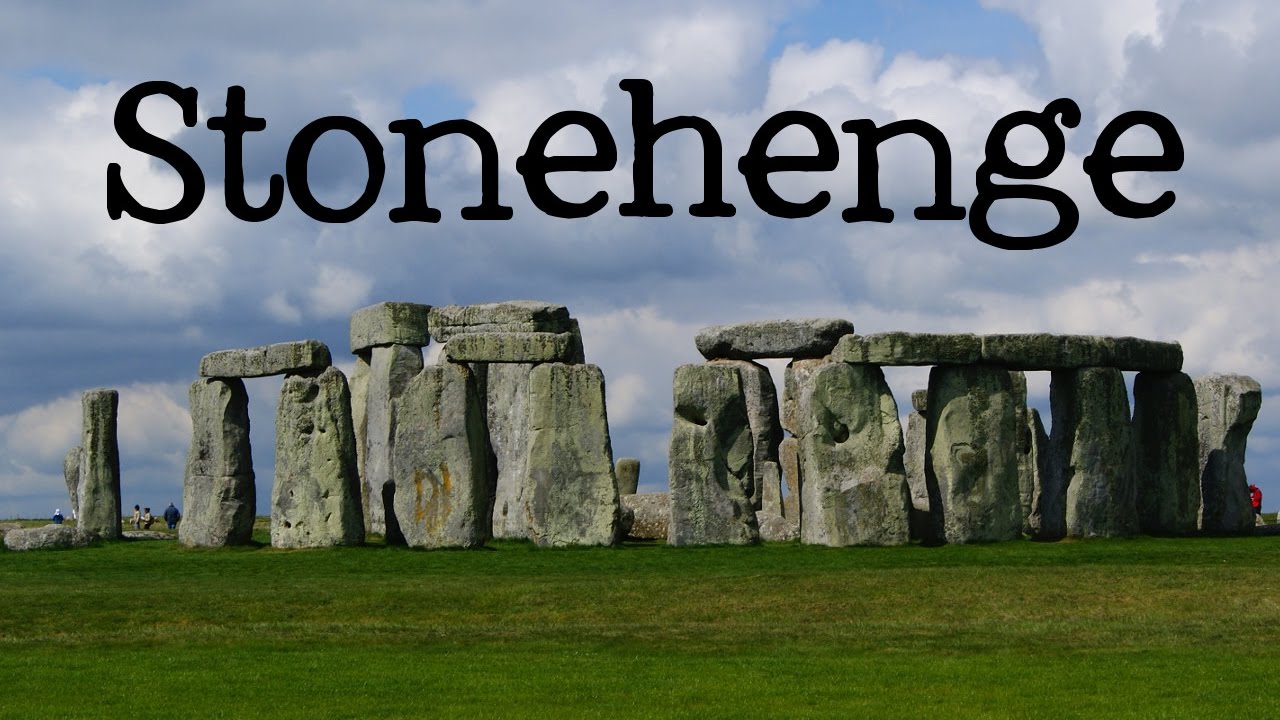 All this stone splendor forms cromlech – several concentric circles (circles having a common center) from rough-processed stones. Rather, it was once a circle, now they are left only pathetic remnants.

The outer circumference, at one time, consisted of 30 vertically standing grayish stones. The height of each of them is 4.1 meters, width is 2.1 meters, the weight of one stone is about 25 tons. Stone slabs were laid on these massive blocks. Each of them rested on two vertical stones, in the flat tops of which were made special protrusions in height of 20 centimeters.

In the overlappings, respectively, were depressions. Through this uncomplicated technical solution, a very robust construction of vertical and horizontally lying stones was assembled. The horizontal stones or crosspieces had the following dimensions: length 3.2 meters, width 1 meter, thickness 0.8 meters. The circle thus formed was 33 meters in diameter. Nowadays there are 13 vertical stones and 6 floors.

Inside this man-made circle there was another circle of 30 blue stones. They were much inferior in size to the gray stones of the outer circle and had no overlap. These days there are not more than ten left.

The blue stones were surrounded by five huge triliths, arranged in the form of a horseshoe. Each of them consisted of two gray vertical blocks with overlapping on them. The weight of one such lump is 40 tons. At the same time, the sizes of triliths are different. The height of the central trilith is 7.3 meters, the height of the extreme triliths is 6 meters. By its foundation, this peculiar horseshoe was directed to the avenue.

To date, the picture has the following content: in the normal state there are now three lateral triliths. Central, the highest trilith remained in the form of one vertical stone. In the same state is the leftmost of the trilith. Between them lie the remains of 15 blue stones. At one time they also in the form of a horseshoe guarded the central part of the cromlech. Among them was a 6-ton altar stone just opposite the largest central trilith. At this point in time, he no longer stands, but is in a horizontal position. Nevertheless, this block did not lose its greatness even in such unpresentable form.

All this stone formation is ringed by two circles of holes. These days these are not naturally the deep pits that they once were, but the scarcely discernible hollows on the soil. The circle nearest to the cromlech consists of 30 holes – they are called Z-holes. In the next circle there are also 30 depressions. They carry the names of the Y-hole. In those remote times, when the whole complex of structures performed their functions, long wooden pillars towered above these pits.

The same can be said about the third circle of holes. It is located very close to the inner shaft and consists of 56 holes. These are the so-called Aubry holes. They were discovered by the British writer and antiquarian John Aubrey (1626-1697) in 1666. In honor of this respected gentleman, they got their name. 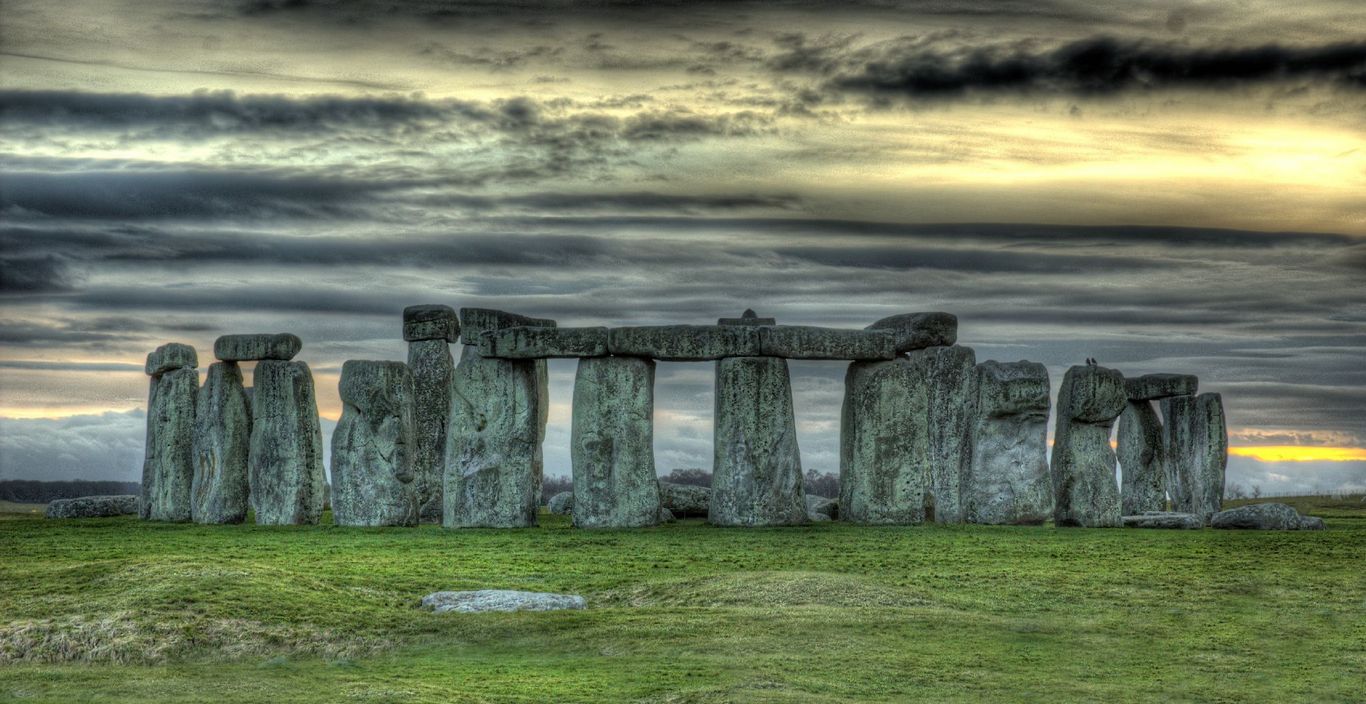 Stonehenge on a landscape background

Just at the intersection of the Aubry holes, opposite each other, there are two mounds. There are no graves in them. By the way, throughout the territory of Stonehenge could not find human remains, except one body. This is the so-called “body of the archer”. It is found in the moat and dates from 780-700 BC. e.

Interest is also represented by two supporting stones. They, like the mounds, lie in the path of Aubrey’s holes. Even in the XIX century, these stones were four, now there are two. These blocks clearly correspond to the sides of the world.

The final touch to this exhibition are two gray stones. One is again in the way of the Aubry holes, just opposite the avenue, which leads to the Avon River. It is a lying monolithic block 4.9 meters long and is called a stone-scaffold. The second stone is located on the alley and on the same line as the stone-scaffold. It stands vertically and is designated as a calcaneal stone. Its height reaches 6 meters.

That’s actually the whole Stonehenge. Some kind of stone blocks, pits, moats – what’s what. However, the interest in this amazing structure of antiquity is enormous. It goes back centuries, and the first mention of it dates back to the XII century. The people who described this peculiar structure were clergymen and historians of Britain – the Girald of Cumbria (1146-1223) and Galfrid of Monmouth (1100-1155). This is reported by the modern official history of the United Kingdom.

It was Galfrid of Monmouth that connected Stonehenge with the legendary British hero of antiquity Merlin. The latter, judging by the legends, was a powerful magician and mentor of King Arthur. He transferred Stonehenge from the earth near the Dnieper rapids to the meadows of England. In the new place the granite structure was frozen in its greatness.

On the days of the summer and winter solstice, the rays of the sun reached the zenith, they made their way right between the vertical stones of the largest 7-meter trilith, which was spread wide in the direction of the alley. At these moments, on the people standing next to them there was an insight: they discovered the secret secrets of being, they received guidance for future actions and great achievements aimed at the welfare of the state. Stonehenge was associated with the knights of the round table, who were equal to each other, but recognized the primacy of King Arthur. Apparently it meant the largest trilith. The images of the rest of the army, bound by the bonds of honor and friendship, were engraved in stone blocks, inextricably joined by powerful ceilings.

All the blocks have non-standard shapes and differ from each other. In ancient times, this constructive decision once again emphasized the individuality of each person, his uniqueness, and powerful binding overlapping – devotion to a common idea and purpose. Well, the altar stone in the center of the cromlech was nothing else than the Grail, which many knights dreamed of getting round the table.

Such a beautiful legend probably did not correspond to the true state of affairs, as there were other equally colorful narratives along with it, trying also to explain how the creation and the very essence of Stonehenge.